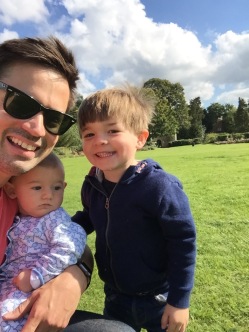 Earlier this year my employer, a management consultancy, updated its maternity and paternity leave benefits to pay mums and dads equally for childcare leave. For me and my wife, not long after the birth of our second child, the decision that I and not her would take the bulk of the leave available to us didn’t need much thought: we would be better off financially, my wife was eager to get back to work, and I felt as though I hadn’t really had a chance to get to know the baby. Surely any man in those circumstances would feel the same?

Well, perhaps not. There were some warm words of support and enthusiasm from my friends, colleagues and acquiantances, but surprisingly there were also plenty of raised eyebrows, some “good for yous” with more than a hint of condescension, and even a little concern for my wellbeing, as though I might be doing this as a desperate attempt to sign myself off from work. The implication was that taking time out of work for childcare, beyond the standard two weeks of paternity leave and weekends, is not a sensible or normal thing for a man to be doing. It seems that it’s OK for men to say their family is the most important thing in their life, but it’s still unthinkable to put it into practice.

After the birth of my first son in 2013 I decided that having only weekends and the occasional evening bath time to spend with him – altogether fewer than a quarter of my waking hours – wasn’t enough.  I took four months of unpaid additional paternity leave, and then switched to working four days a week on my return to redress the balance. A week ago  I walked out of the office for the last time until May for six months of shared parental leave for my second son.  My decision to work less does not belie an interest in my career. I do enjoy my work. It is fast-paced and exciting. I get to work with some brilliantly talented people. It has boosted my self-esteem immeasurably over the decade I have been doing it. It is rewarding: not just financially but also from a sense of personal achievement and self-worth. And I hope that it will continue to be all of those things for many years to come.

But a career in itself is not a good enough reason for me to turn down a golden opportunity to spend some time with my children.  Jobs come and go; families don’t.  I suspect that in twenty or thirty years time it wouldn’t be the promotions, pay rises or performance appraisals that I remember most fondly about my life, but those precious moments with my young family.  Their first steps, first words. Their first mouthfuls of real food to our first meaningful conversations together.  I would like to think that my children will also benefit from having a more balanced approach to their care from both of their parents.

Those are not the only good reasons.  There is also the significant financial incentive of my employer giving me full pay to take leave, whereas my wife would only receive relatively modest statutory maternity pay.  And, most importantly, although my wife loves our children enormously and has done a wonderful job caring for them, she is keen to return to her own career and a job that she finds personally rewarding for similar reasons to mine.  Someone has to look after the baby, but why should being a woman mean it has to be her?

The fact that there are still raised eyebrows at the thought of a man doing more than handful of hours of childcare per week, even with all these good reasons for doing so, speaks volumes about the distance we still have to go to eliminate gender discrimination in our workplaces.  For someone to believe that a man’s rightful place is in the office and not looking after children is surely equivalent to believing the reverse for women.  How can women compete with men for boardroom seats when they are expected to bear the entire burden of childcare responsibility simply to avoid their male partners being demoted to bum-wiping duties?

My intent in writing this blog is not to chide other men for not making more time for their children. I recognise that what is right for me and my family might not be right for everyone. To be paid for shared parental leave is regrettably still rare in the UK, and for many families it might not be a practical option for financial or other good reasons. But my hope is that sharing my experiences, as well as discussing some of the broader issues around the role of men in childcare, might help persuade men who are put off by the negative stereotypes of being a stay-at-home-dad or who are worried about the impact to their careers to at least give the idea some consideration.

So, to answer the question in the title of this post, I’m taking six months off work for several reasons. For myself, to ease my fear of missing out on my kids’ childhood. For my wife, to enable her to return to work. For our bank balance, as the extra money will make a significant difference to our lives. And for my two boys, in the hope that having their dad alongside them for more than just two days a week might make a meaningful difference to their lives. But more to the point, what good reason is there for me not to?

Every tiny scratch needs a plaster now. He has three of them on at the moment.